Huffington Post Readers Reveal: Books They Hated That Everyone Else Loved.

holy shit. I finally found the most obnoxious commenters (to me). I never realized how annoying people bitching about books was until I read a string of these in a row.

Although, I don’t know, my crabbiness is on level red.  I think I’ll grab my fluffy kitteh and cuddle into bed.  I wish I could sleep for a week.

OK Senate Approves Life In Prison For Making Hash – Toke of the Town.

ahh… for hash?  really?  That is not OKlahoma.  Shocking that our jails are all overcrowded.. really mind-boggling.

..When I moved to California 9 years ago, I had to pass through that state.  It was amazingly boring, except for my favorite billboard.  It had a child crying and said “Child Abuse is Not OKlahoma.”

Heh.  So not a situation where I would take the pun-route, but its existence made me giggle for quite some time.  Thanks for making me laugh at child abuse, Oklahoma.  And for….. I have no idea what else Oklahoma is good for.  I guess just that.

Rais Bhuiyan, Victim of Post-9/11 Shooting, to Sue the State to Try to Spare Attackers Life

​At 10 this morning on the steps of the Heman Marion Sweatt Travis County Courthouse, Rais Bhuiyan, who was shot in the face by white supremacist Mark Stroman as part of a post-September 11, 2001 shooting spree, will announce that hes filing suit today against Gov. Rick Perry and other state officials. The suit is a last-ditch effort to prevent Stromans execution, which is scheduled for July 20 in Huntsville.

this is the closest I’ve ever come to liking an athlete since I was like 13.

Well, 1990 was a long time ago. Those of us who’ve hung out on the internet long enough know better than to express ourselves by playing the Third Reich card. But it seems to me that, where we used to say ‘Hitler,’ we now say, ‘Hipster.’ And like Godwin did all those years ago, I’m here to say that using ‘hipster’ as an insult will automatically quash the coherent argument that accompanies it.

via What Would Godwin Say?: Hipsters « Thought Catalog.

(too much) food for thought

Erin Gloria Ryan — A Harvard-based specialist on childhood obesity thinks that super heavy children should be temporarily removed from the custody of their parents to promote the childs best interests. And maybe hes not totally wrong.

via Should Parents Of Dangerously Obese Children Lose Custody?.

Dodai Stewart — A tipster urged us to take a look at the wedding photos of Dave & Chantal, who got married in April 2010. The theme of the event? Colonial Africa. Wait, what? 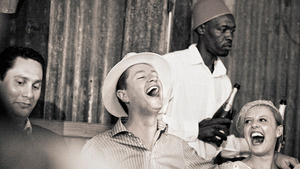 no turning the other cheek for this homophobe

​Bible-thumping preacher James Belcher abhors felching and anyone who partakes in a sharing of the love. Hes also a hater of bis, trannies, bull dykes and sodomites. Packed with that full matching set of unmagnanimous baggage, the Man of God took to the streets recently…

My comment: god I wish it had been a dude that kissed him.

What an asshole.  Yeah dude.  Press changes against a granny for kissing your cheek.  Good call.  Ya know, Jesus said that if someone SLAPS you, you should turn the other cheek.  Guess we read different Bibles.

you must remember this, a kiss is just a kiss….