The latest character to join the Sanrio family, the Japanese lifestyle brand behind Hello Kitty, isn’t a cuddly animal, or even a living creature. It’s an egg named Gudetama.

The company just released a short film (which can be seen below) featuring the little egg. In it, an egg shell is cracked open and out pops Gudetama, a glob-like creature with arms and legs.

Gudetama is pictured fried on rice, as tomago sushi and dripping from a cracked egg. He’s whiny, always has a face of despair, and according to the Sanrio release on the little guy, is “unmotivated.” His attitude is related to the fact that he only exists to be eaten. 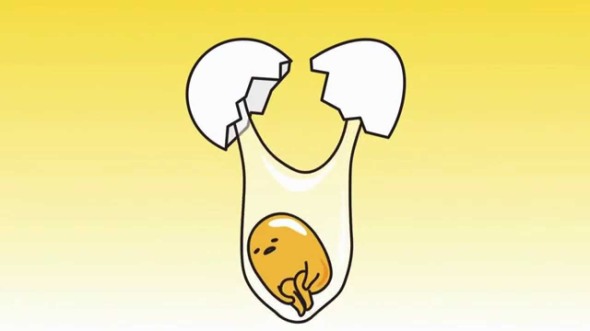 And Gudetama is already on Twitter, with pictures of him on a plate of rice with the caption “impossible, oh.”

The character was part of Sanrio’s contest last year to find new characters based on popular Japanese food. Some of the other characters included a tofu geisha and a bread-shaped panda bear.

After a public vote, Gudetama was the runner-up, while Kirimi-chan, a salmon head, won first place and was developed into a line of products.

Slimy salmon and now slimy raw egg? Maybe there’s something to be said for drawing arms and legs on slimy foods we can’t get enough of.